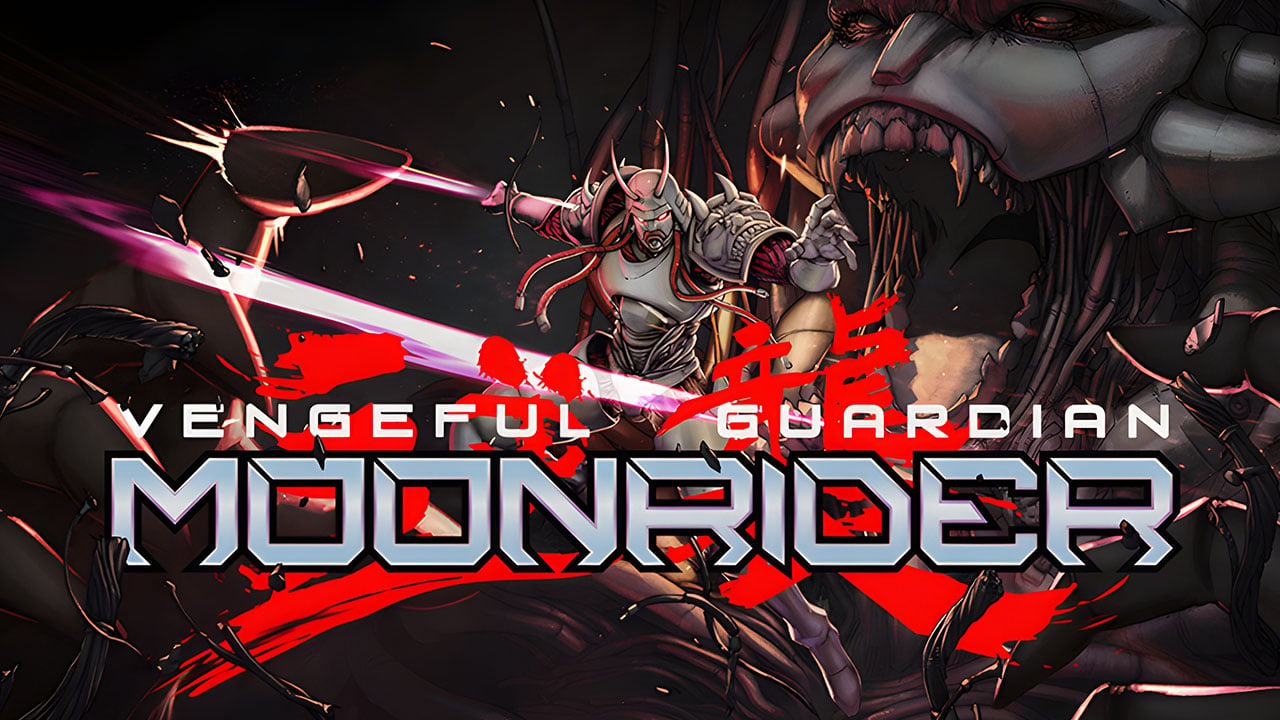 JoyMasher is a developer who proves they have a panache for making retro-inspired action games. They began with humble NES-style action platformers Oniken and Oddallus. It wasn’t until Blazing Chrome, a Contra-inspired run-and-gun shooter, that pushed the envelope on pixel art and animation to a level of craftsmanship that is rarely seen.

Blazing Chrome didn’t just look amazing- it was also an exceptional action game that was on par with the likes of Konami’s best efforts. Vengeful Guardian: Moonrider would take a more original approach with its gameplay by being broader with its influences, making it feel less like an imitation.

Taking cues from many retro classics like Ninja Gaiden, Shinobi III: Return of the Ninja Master, Turrican, Strider, Hagane, and Mega Man X; JoyMasher’s latest feels more like it was a game that existed in the era that inspired it. Rev your engines, sharpen your blade, and dive-kick a cyborg in the face get ready for this Vengeful Guardian: Moonrider review! Too often indie developers spread themselves too thin by attempting ambitious and massive 2D metroidvania-style platformers. There is an understandable desire for them; who wouldn’t want a lengthy and epic 2D action game where you feel a profound sense of growth?

The only problem is that almost every developer plays it safe by making metroidvanias that follow a generalized template. Vengeful Guardian: Moonrider rejects popular trends and aspires to remind gamers of the purity of linear action where rarely anything gets rehashed. Just like rejecting the played-out rogue or metroidvania gameplay, Moonrider himself refuses his programming. He is a natural-born rebel and instead of enforcing the totalitarian laws of the state, he seeks to punish the wicked who holds the powerless beneath the heel of their boot.

There are six other guardians in the city and Moonrider will have to find them by choosing their stage and endure an awesome gauntlet of daring platforms, mini-bosses, and dastardly placed enemies. Each level comes with its gimmicks and sly homages to classic games.

The burning jungle area has cheekily placed wall turrets that are ripped from Contra and the water stage has a mini-boss that is suspiciously similar to Mother Brain from Metroid. When Vengeful Guardian: Moonrider does something original, it makes an impression. The large mech that pursues Moonrider through the forest was especially a highlight. The metalhead was so persistent, it made what would have been a standard level way more intense. Having to fend off foes while taking cover, leaping over hazards, and evading missiles proved to be one of the more thrilling moments in what was already an action-packed game.

Vengeful Guardian: Moonrider‘s stages are diverse in their theming. One area is a nightmarish flesh zone with demonic backgrounds and enemies mutating like in John Carpenter’s The Thing and a puzzle-like sequence with switches and locked doors.

Some stages will also have Moonrider using his trusty motorcycle and will play out like a mixture of Road Rash and some kind of shoot-em-up. These levels are a highlight, not just for their spectacle and impressive use of scaling graphics, but also for adding value by mixing up the action. The varied platforming and wall-jumping give Vengeful Guardian: Moonrider an ebb and flow to its playability. The protagonist is a powerful cyborg ninja and players can feel it as they negotiate each stage.

His confident strut and effortless attacking poses make it hard to not feel the most capable and deadly metal motherfucker since Alex Murphy sent Clarence Boddicker to hell.

Aside from his basic combo, Moonrider has a devastating dive kick that can make him pogo on foes, Scrooge McDuck-style. It looks awesome and has a crunchy connection when Moonrider bounces off his target. As if this wasn’t enough, he also gains special attacks from defeating each of the six guardians. One would think the Mega Man franchise would have run these ideas dry, but Vengeful Guardian: Moonrider managed to keep things fresh. Abilities like the teleport dash or the black hole tentacle are useful and extremely devastating when used in the right context.

As if this wasn’t enough, gamers can further modify Moonrider’s playability by equipping two chips that have passive effects. These can offer unique abilities like being able to double jump, gain HP or weapon energy back from killing foes, or extend the range of the hero’s sword.

There are a lot of different combinations which can lead to interesting playstyles for bold gamers to experiment with. This mechanic adds replay value and also doubles as a soft difficulty modifier for players who want to make the game easier or much harder. It is possible to make a build that emphasizes enemy weapon usage over basic attacks if the user is so inclined.

Vengeful Guardian: Moonrider has incredible pixel art and animation. It is very faithful to the era it is paying lip service towards and is steeped in ninja fetishism that rocked the 90s. The setting is a classic depiction of a cyberpunk dystopia and relies on dank and dirty colors to make the environment feel vile.

Everything feels like it has grit and some rust to it- even the cyborg enemies and the biomechanical abominations spew chunky, pixelated blood. There’s little touches like when stage bosses get cut in half after the last hit, the virtuoso level of detail that makes memorizing their patterns feel worth it.

The extensive use of parallax layered graphics gives the scenes some depth. Misty areas are depicted and background elements are impressively animated, making the environments come alive and feel lived in. The patterns and attacks are not especially difficult, though some of the bosses, later on, may give some players a run for their money. Vengeful Guardian: Moonrider is very tightly balanced with its difficulty and is generous enough with lives and checkpoints that anybody can beat it with some persistence.

Vengeful Guardian: Moonrider‘s challenge is spicy enough to demand the player to pay attention to what they are doing, but forgiving enough that they don’t feel pressured to not mess around. The chip system gives enough leeway so even scrubs can look awesome and pose against an intimidating blood-red moon in a crimson sky.

It is a short run- lasting roughly the same length as the kinds of games it is inspired by: around two to three hours. For some, this may be a turn-off, but Moonrider is priced appropriately. It may be short, but it is very replayable and maximizes its length with fresh content at every moment.

Vengeful Guardian: Moonrider has shredding music that aims for a strong Asian feel. It sounds like what you would get if Shinobi met Contra‘s meaty and heavy bass chiptune. Some voice clips are present and they have low-bitrate and compressed grunge to their sound quality for maximum authenticity. The only thing Vengeful Guardian: Moonrider is missing is a good CRT filter to give it a haggard texture for authenticity. The option included does not suffice and fades out the entire image. Despite this petty shortcoming, gamers and retro enthusiasts especially won’t find a finer 2D linear action platformer made this generation.

It must have taken a lot of guts from JoyMasher to release a linear 2D action platformer that relies on a “lives” system in 2023. The spectacle and lavish pixel art are some of the best around and it is apparent that the artists poured all their sweat, blood, and tears into every dot for Vengeful Guardian: Moonrider. They went for it and crafted what is possibly one of the greatest examples of its genre.