I think I speak for a lot of people when I say that I really enjoy tower defense games. There’s just something universally satisfying about keeping a bunch of knobheads out of your stuff, whether they be zombies, soldiers, giant aliens, or annoying roommates. Castlestorm is no exception to this rule, delivering satisfying tower defense gameplay with an Angry Birds-esque twist.

Castlestorm is an interesting genre mash-up, combining medieval tower defense with 2D physics-based destruction. Through most of the game, you’re defending your castle with a ballista and a myriad of different types of soldiers — from archers, to paladins, to giant stone golems. You unlock different troop classes as you progress through the story, and the ballista is no different. You’ll use shots ranging from explosive crag bombs to rusty old bits of armor and scrap metal, to varying levels of effectiveness. There are two ways to win, either capturing your enemy’s flag with ground troops, or bringing their castle to the ground with well-aimed shots. Additionally, there are some RPG elements, in that you can level up pretty much everything you utilize on the battlefield — and coupled with a castle editor, it allows you to tailor your experience to your specific gameplay style.

The gameplay, clearly the most important part of a game like this, holds up nicely. That feeling when you fire a bomb and knock down an entire part of the enemy castle is truly blissful, reminiscent of knocking over a block fortress as a child — something that Zen Studios fully embraces. Micro-managing your soldiers and switching back to your ballista and magic spells in the heat of battle is quite easy to do, which really adds to the immersion in a game like this. There’s nothing that reminds you you’re not actually Sir Gareth, repelling a swarm of enemy vikings, like having to wrestle with unresponsive controls — which is thankfully not the case in Castlestorm. Additionally, The difficulty is able to be toggled, leading to surprising amounts of replayability to try to get all the 5 star ratings on every map, since playing on easy or normal will knock off a single star from your overall score. 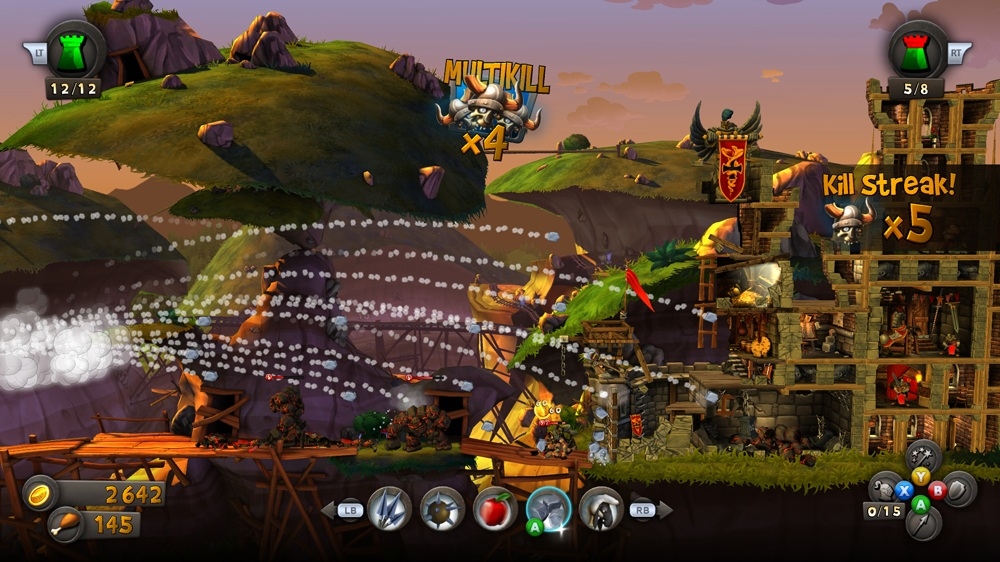 Castlestorm’s story is pretty straightforward, with a few minor twists here and there. It’s never anything more than, “Oh man, our stuff is messed up so we’ve got to kill Vikings/Golems/Knights for (insert reason here,)” but I find it has its own charm. In the DLC released just a few days ago, you play as a certain main character’s relative, and it adds a good few hours of gameplay and story onto the core game’s decent length.

As far as graphics go, this game isn’t anything to write home about. However, the over-saturated colors and blocky textures remind me a lot of Warcraft III, which I think may have been on purpose. Either way, I don’t find that they detract from the overall experience at all — if anything, they give me a nice warm fuzzy feeling in the cockles of my heart. The sound design, in a similar vein to the graphics, is pretty goofy overall, and doesn’t take itself too seriously at any point. When there are things blowing up left and right, and gryphons are being shot out of the sky with explosive, flatulent sheep, the sounds are pretty accurate. That’s all I can ask of a game like this.

Now, this all sounds quite positive, but let’s talk about the negatives. The story, while charming, isn’t anything that’s going to change your life, or even cause you to remember it for more than a few hours. I remember the names of the handful of main characters because they were humorous, but not overly engaging. Also, after playing for several hours, some targeting issues started to bug me–mainly in a series of missions where you had to fire all your shots over a large mountain face. The game required you to arc your shots pretty high, which was problematic because not only does the screen not go up high enough, but there’s a big honking button at the top of your screen to give you a view of your own castle. I can’t tell you how many times I clicked that by accident, whisking me away to my own fortress when I was trying to fire giant boulders at theirs. A minor complaint, sure, but enough to irritate me for a few levels.

Overall, though, Castlestorm is a thrilling experience, combining Angry Birds-like, 2D physics-based destruction with real-time strategy and tower defense elements. If you dislike this game, then I’m afraid I’d have to accuse you of being an enemy of fun, because that’s what Castlestorm is. It’s just fun. Satisfying, explosive entertainment. A lackluster story and one slightly frustrating series of levels doesn’t hold it back from greatness, and I’d recommend this game to anyone who likes blowing things to smithereens.

Castlestorm and its DLC is available on XBLA for 800 points, and on Steam for $9.99 USD.