There have been countless Kickstarter disasters in the gaming sphere, such as Ant Simulator, Mighty No. 9, Yogventures, etc. It became pretty commonplace for backers to get taken for a ride, as when games actually did see a release, they were a shell of what was initially promised in the Kickstarter pitch. One game I was really hoping wouldn’t suck was Bloodstained: Ritual of the Night, however. With Koji Igarashi, the original creator of Castlevania, at the helm, I was so sure something magic was going to come out of the project. Thankfully, after getting in some quality time with the game, I can confirm with certainty that this is the Symphony of the Night successor we were all praying it would be. The graphics are the first thing my beady little gamer eyes noticed upon booting up Bloodstained, and I have some issues with them. The worlds themselves look great, and the character model for Miriam (the protagonist) is hot, but a majority of the NPCs look really drab and boring.

I’m also a little disappointed the game wasn’t just 2D sprites, since a Symphony of the Night spiritual successor would make a lot more sense emulating the same style of animation, but I understand that sort of thing is a lot more labor-intensive and costly than re-kerjigging the same 3D model to do all sorts of different stuff.

I will give the game credit where it’s due, as the monster designs are pretty baller. A lot of them are fairly unique, and there are certainly a ton of different critters to behold. There are even plenty of enemies who drop weapons exclusive to them, so it can be a nice little reward when grinding for EXP and shards.

I’m getting ahead of myself here, though. Let’s start with shards. So, Miriam is a Shardbinder, a human infused with demonic essence by the Alchemy Guild. The Guild feared the loss of their control over their wealthy patrons, as the Industrial Revolution was in full swing, so they used these Shardbinders as a sacrifice to summon demons as a scare tactic. 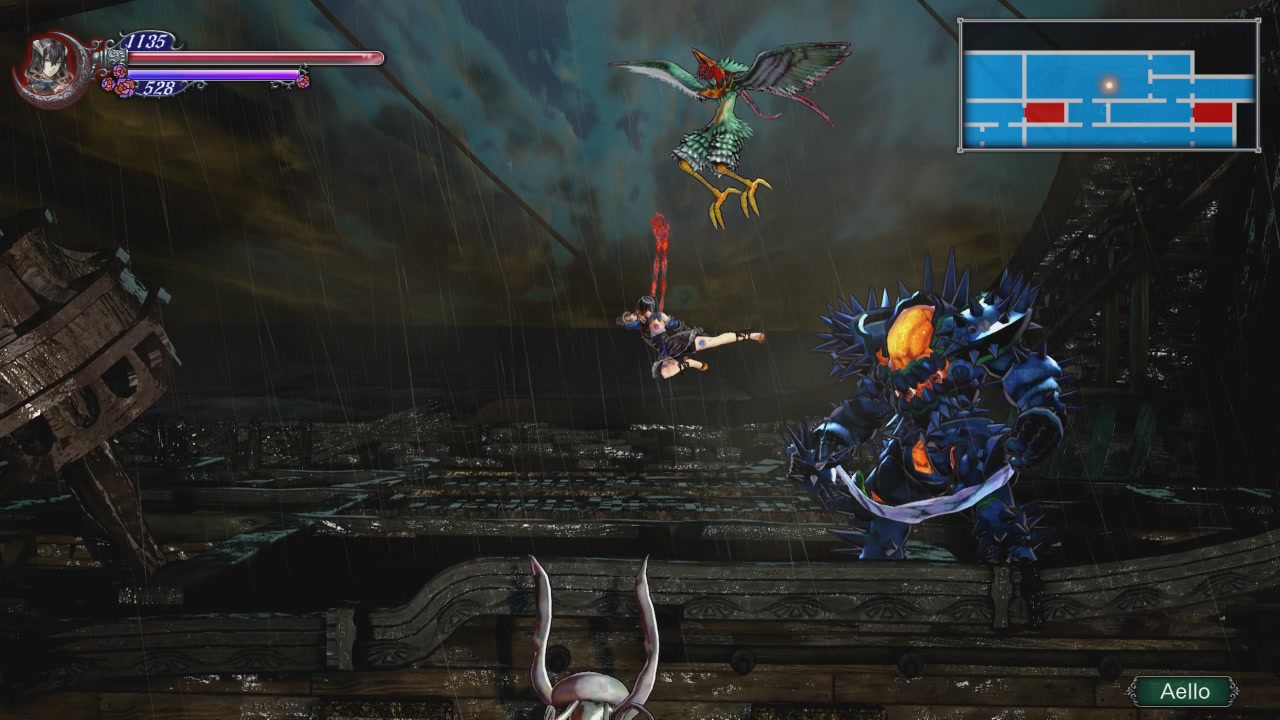 It backfired spectacularly, as summoning extradimensional beings usually does (ask me about my Goku Tulpa), and brought calamitous destruction to the world of man. Of the Shardbinders who were sacrificed, only a man named Gebel survived the process, though Miriam was able to avoid being capped due to falling into a mysterious sleep before the ritual was to take place.

So Miriam wakes up several years later, miraculously without bedsores or a bad case of morning breath, and finds out that Gebel is like, mad evil now. A former member of the alchemy guild, Johannes, teams up with her, and the pair head across the ocean to a destroyed village on the outskirts of, you guessed it, big spooky castle.

There’s a lot more that plays out in Bloodstained’s story, but I won’t spoil it any further. I think it served as an adequate setup for the game, though I will admit I wasn’t blown away by the narrative or characters. You have a big-boobed pantyhose nun and an edgelord weeaboo voiced by David Hayter to look forward to, though, so that’s nice.

But how does it play? Well…it feels a lot like Symphony of the Night, for one. A big castle to explore, a myriad of different weapons to choose from, back dashing (and back dash cancels), and a ton of enemies and bosses to cream with your big whirling razor sword. Miriam’s abilities as a Shardbinder also allow her to absorb skills from enemies, which you will get from most baddies as a random drop. These vary wildly in usefulness, though you can upgrade most of them, so it’s pretty fun to experiment and see what’s actually worth bringing to battle with you.

The maps are a joy to explore, with a surprising amount of different environments and biomes crammed into one castle. There are definitely plenty of ‘eureka’ moments as well, once you finally get a tool to traverse an old area you couldn’t reach before. I’m always that guy who’s like ‘where the hell do I go’ for hours in these games, but I experienced that less here than say, Hollow Knight.

While the game may look vastly different, it still retains that Castlevania feel to it, something I was intensely grateful for during my time with Bloodstained. Picking this game up and playing it just feels nostalgic and familiar, and I’m sure anyone who grew up with SotN will know just what I mean.

Bosses are fun and dynamic, and there are a few enemies sprinkled throughout the maps that surprised me with the moves they’d pull. However, I’d recommend playing through on Hard your first time through, as normal was a little too easy. Nightmare is essentially challenge mode, as it has all the difficulty from Hard mode, but your and your familiar’s levels are capped at 1. The sound design in Bloodstained: Ritual of the Night is pretty tight. Combat is full of chunky feedback for your hits, and the music (while a tad repetitive at times) certainly got me more engrossed in the experience. The voice acting, while great at times, could get a little dumpy depending on who was talking. With talent like David Hayter and Fred Tatasciore though, it’s hard to complain too much.

What I can complain about is the slowdown, though. While the framerate on the PS4 version of this game is fine in most cases, there are a few different events (like getting a new shard, for instance) that bring the game to a screeching halt for a second or two. It’s pretty jarring, really. I remember a few boss fights tanking the game’s FPS as well. I’ve heard none of these problems exist on the PC version, so that’s probably the one you wanna get.

Hopefully the rest of the promised features will be delivered before too long, as there are plenty of stretch goals that have yet to be implemented into the game. I will be waiting eagerly for them, though I scarcely need an excuse to go back and play Bloodstained. I’d recommend it to everyone, though if you already dislike these types of experiences, I doubt this’ll be the one to change your mind. All in all, though, Bloodstained: Ritual of the Night brings me back. Like drinking one of those Little Hug fruit barrel drinks while sitting on your mom’s old floral print couch, playing PlayStation instead of doing homework. Iga’s goal was to make a solid Metroidvania game, and he definitely achieved that in spades.

Bloodstained: Ritual of the Night was reviewed on PlayStation 4 using a review copy purchased by Niche Gamer. You can find additional information about Niche Gamer’s review/ethics policy here.