Recently I had the pleasure of talking to the creator and owner of Dykom Software, Mike Garn, about his pedigree and his new studio.

Our interview talked up Mike’s time working on Call of Duty and Apex Legends, forming his own development studio, and his upcoming new game, Arksync:

First, a look at his new game, Arksync, an action-packed 2.5D twin-stick shooter launching on Steam sometime in Q4 2022.

Niche Gamer: Could you tell us a little bit about who you are and your experience in the games industry?

Mike Garn: My name is Mike Garn, I got into the AAA game industry in 2014 as a concept artist. I’ve worked on a bunch of stuff. Several Call of Duty games, Prodeus, and Apex Legends to name some.

In 2018 I quit my pretty cool job at Treyarch to start my own studio, and I’ve been doing that on and off with freelance concept art ever since.

Right, so you were working as a concept artist on some pretty popular games, what was it like working on games like Call of Duty and Apex Legends? I can imagine it would’ve been quite the experience.

It was pretty sweet. I worked with some really cool people, really talented people. Being a part of something that big in a lot of ways is really special.

I’d say the coolest moments of my experience have been when people reach out and tell me they want to get into game dev because of my work. That’s pretty awesome.

That’s really cool, your work has probably influenced a lot of people who grew up playing your games. So you went from concept artist to an indie dev, what was the motivation for such a large change?

A few reasons. When I was a kid it was something I really wanted to do. I lost sight of that for a huge part of my life and as I got into concept art in my late 20s I knew I’d circle back around to building my own studio eventually. The other half of that is a bit more spicy.

Working for big studios is very fun, but leaves a lot to be desired for someone like me. I’ve got a lot of ideas, and also don’t particularly like the direction much of mainstream gaming is going.

Gaming has become so commercialized and profit-motivated, I have a hard time being a part of that machine. I want my studio to do things differently.

You know, make games that can sustain a studio while holding more responsibility for players and the impact a game will have on them.

And you’re planning to start that mission with your game Arksync?

Yeah, Arksync is step one! Well if you don’t count all the steps it took to get to Arksync haha.

I can only imagine how difficult that is. So what is Arksync all about?

It’s about a teddy bear that reprograms a war robot to protect him as he tries to get back home. I’m still writing the story, it’s almost set. I’ve rewritten it probably 8 times now.

It lays the groundwork for everything else I want to do in this universe. It’s been a wild game of 4d chess writing this thing.

So, it’s safe to assume Arksync is the start of a larger story and world?

Definitely. People really have no idea what I’m up to with the game, and just how far out I’ve got things planned. 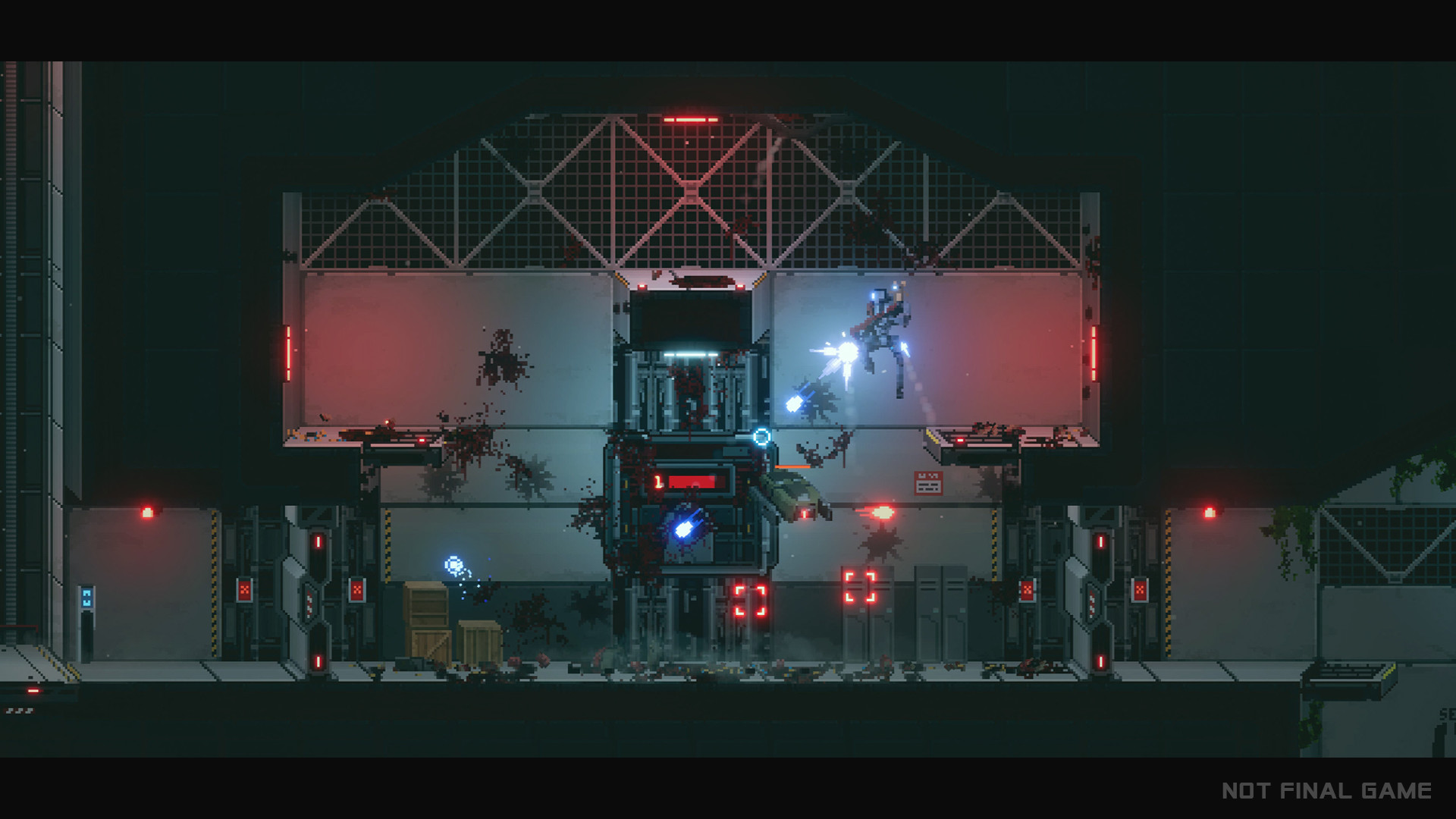 Obviously, you’ve spent your time around a lot of game developers, what was one of the biggest surprises you had switching to development yourself?

I suppose I expected this going in, but it still took me by surprise how deep it goes, but the isolation of it all. I miss having people around developing the same ideas with you, and just overall working with a team. It’s a lot of alone time just watching the world go by outside your window.

I wish that wasn’t the price for something this big, but I hope it will be worth it. I actually started hiring people on the team a couple of months ago, and it’s been a really good thing. I look forward to having more people on future projects.

How many people are on the team now?

I’ve got one other person doing art-related tasks, and I’m currently narrowing it down bringing on two more for art and music.

That must be a pretty daunting task. There have been a lot of 2D metroidvanias on the market recently like Dead Cells, Hollow Knight, and Blasphemous. To someone reading this interview and seeing Arksync for the first time. What would you say Arksync has to make it stand out among these games?

I’d say first it’s not a metroidvania but structured with branching levels that lead you back to the same final level. To finish the game you have to reach the end several times.

You have lives that keep you going on a given run, but if you lose those you rebuild yourself back at your base; losing all your weapons and currency you’ve collected or brought with you.

A lot of people compare Arksync to Contra or Metroid from what I’ve shown, but it’s so much more aggressive of a game than that. You really have to focus when a fight gears up.

It’s safe to say there will be some trial and error, and multiple endings then?

Yes, a lot of trial and error. I’m hoping to mitigate as much of that as possible, making sure the player is well prepared to play the game, and hopefully without them even knowing I’m trying to prepare them to have a challenging, but a fair experience.

I kicked around multiple endings for a while but decided on having one solid ending for this. That’ll make more sense why a year or so after Arksync is released.

You mentioned earlier about people wanting to take up a career in game development because of your prior works, if you could share one piece of advice to any future developers, what would it be?

The hard truth about this industry is that there’s no shortcuts into any part of it. An individual needs to make plans, set goals, and work at it every day.

They need to be honest with themselves and their work so they can improve on their shortcomings and feel triumph in their successes. It’s a lot of hard work, but everything amazing in this world worth having is. If you’re wanting to do this, you absolutely can.

Before we wrap this up, is there anything you’d like to say to the people reading this interview right now?

If anyone reading this resonates with what I’m doing, I’d ask you to follow the project. It goes a really long way into the project’s probability of success, and that interest really means the world to me. Thanks.

And where would be the best place for people to stay updated with Dykom Software and Arksync?

DykomSoftware.com has links to every way you can stay connected.

Great, thanks for your time Mike.

If you want to see more of Mike Garn’s work you can check him out on Twitter & Instagram. If you want to know more about Mike and his team head on over to Dykom Software’s website.