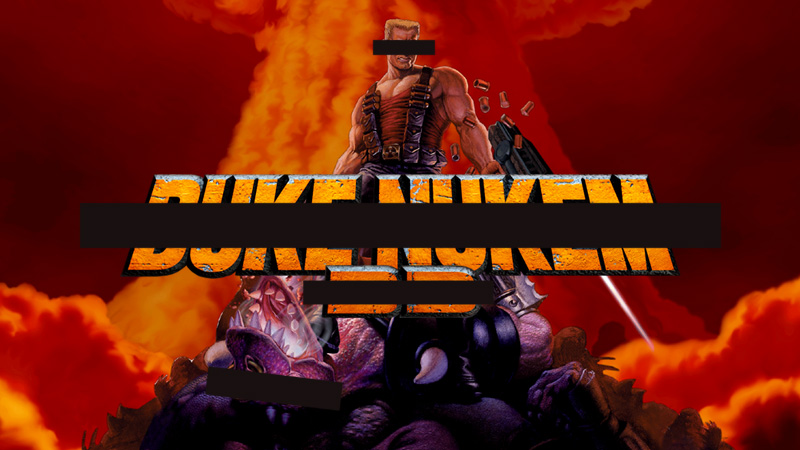 When 3D Realms released Duke Nukem 3D back in 1996, it was revolutionary for pushing first person shooters forward for its intricate level design and excellent responsive action. Yet, what makes it stand out is its crass and macho protagonist who really knows how to treat a lady.

Duke is a gentlemen and a scholar of turning aliens into mincemeat, as well as defacating down their necks. When Doom-man was running around Hell and Mars, Duke was exploring red-light districts, fast-food joints and space stations infested with H.R. Giger knock-offs. Duke was saving ladies kidnapped by aliens and even though it was optional, he could also choose to kick them right in their face, blowing them up into smithereens.

Duke’s game was immersive in ways Doom wasn’t. There was so much to interact with and most of it was purely there for flavor. Today, much of the little activities Duke could partake in would never fly today. Just how triggering would Duke Nukem 3D would be if it were to come out in the modern day? The cold and hard truth is that there will never be a protagonist like Duke Nukem ever again. Duke is many things to a lot of people, but one thing is for certain; he was a monument to machismo. His tremendous biceps, pulsating neck muscles and gnarled hands suggest he knew his way around a gym. A physique of a perfect man, a figure for men to aspire to be like.

His overwhelming masculinity would be deemed “toxic” by the twitterati. Duke is the kind of guy who’s weighty sack dangles low, barely grazing the ground he stomps upon and this reflects his gung-ho (and hung-low) attitude. His nigh infinite ego matches his power, as he gleefully juices up on steroids and fearlessly threatens monstrous aliens that tower over him.

In his game, he can freely explore strip clubs and adult movie theaters. Screens vast and small depicted wonderful single second long clips of erotica and even though nothing was shown, it elevated Duke Nukem 3D to a mythical status. It suddenly felt like the kind of game you shouldn’t own, yet there it was. If you were a kid in the 90s, there was always rumors of games like Mortal Kombat or Tomb Raider where there were cheats to enable nudity on the female characters. Along comes Duke Nukem 3D that has titty-bars where Duke could tip the lady to jiggle something nice in front of his face. This was not even a secret, it was a basic action.

It didn’t even matter that the digitized sprites were low-rez, this was a game that proved you were a man. The best part was that Duke’s wallet was as big as his manhood, and he could infinitely tip the babes for an eternity. He could even chuck bills at women who weren’t dancing and though they wouldn’t show the goods, the sentiment was appreciated.

Today, the only babe that ever gets saved is Princess Beach and she never jiggles anything for Mario no matter how many gold coins he slips her. Sadly, Duke and many others can’t ever tip hard working women in games anymore. Too many sex-negative grand standers would probably flip over the developer’s cars if anyone attempted anything like in Duke Nukem 3D again. Sex sells and the boys at 3D Realms understood this. Duke Nukem 3D was an incredible, sexually charged action game where every gun was a phallic symbol. The constant barrage of provocative imagery and the violent bloodshed made the experience a testosterone fueled euphoria.

Duke’s threats are no match for him. The queen alien he battles at the end of the game is ultimately sexually violated by Duke, using a pipe-bomb and blowing her up into a fine mist. There is no way anybody could get away with depicting that in today’s overly sensitive society. The game would be covered with trigger warnings or would be cut entirely.

When Gearbox Software tried to continue Duke’s legacy with Duke Nukem Forever, they grossly misunderstood the character and the appeal. Naturally, the developers injected unhealthy amounts of irony into Duke and tried to make some kind of limp post-modern statement about his character. The one of Duke Nukem Forever was all over the place and it never felt cohesive or that it had a vision behind it. The emphasis on realistic visuals also made the premise more off-putting than the more exaggerated 1996 DOS game. The scene in question involves two attractive female characters being made into alien breeders.

When Mary and Kate Hudson meet their untimely demise in Forever, the scene plays out like something from a nightmare. The boys at Gearbox Software clearly were trying to make this scene darkly comic, but instead comes off as something out of the mind of Junji Ito. While this in itself also something that couldn’t be done today, it was a scene that didn’t come out as intended.

The Build Engine visuals became a style in itself and in Duke Nukem 3D, the abstracted visuals allowed for a greater degree of freedom. The limitation allowed players to fill in the gaps with their imagination, making the game world feel more detailed than it was. This made the Build Engine game from 1996 age better than Unreal Engine 3 game from 2011. Duke has to be a strong female protagonist now and must be incredibly boring. Shelly is bland and has almost no character. Her lame quips lack the ballsy punch of Duke’s and since modern society is extremely sex-negative, she can’t express herself like Bayonetta can. She is completely covered from the neck down and has no defining characteristic other than being a female version of Duke.

Ion Fury is the proof that nothing like Duke Nukem 3D can be made in the 2020s. Heroes like Duke are like John Wayne; rough and rugged men for younger men to aspire to be. Big men who smoke, have strongly defined jawlines and calls all women “babe”. The only man that younger men have to aspire to be, is the “Chad” meme, who also happens to have an uncanny resemblance to Duke.