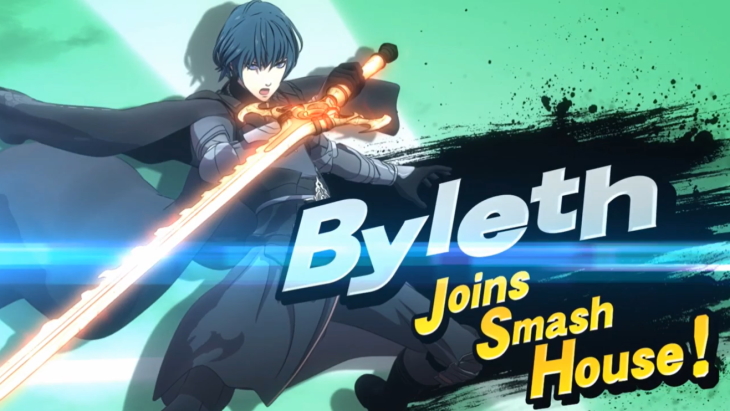 The character was kept as a surprise, even to other Nintendo staff around the world. Both male and female forms of Byleth will be joining the roster.

With even the character trailer joking about how many sword users there would be in the game, it was revealed that Byleth can wield four Hero’s Relics- The Sword of the Creator, Areadbhar, Aymr, and Failnaught- each assigned to a directional input for both regular and special attacks.

While Byleth has low movement and a poor grab reach, they are better suited for ranged attacks. The Sword of the Creator is with upwards inputs, and can extend into a whip and grapple foes. The spear Areadbhar is for side inputs, and has amazing range, with more power at the tip.

The axe Aymr is used with downward inputs, and is devastatingly strong, albeit not very long reach. The Down + B special has some wind-up time much like Captain Falcon’s Falcon Punch, but it has super-armor to endure all but grabs.

Finally, the bow Failnaught is with neutral inputs. While it can shoot powerful shots, the shots cannot be released until fully charged. Over-charging it will make it even more powerful, but cannot be canceled out of. The neutral air spins the bow itself, which is good for combos. As with other characters, some attacks can be slightly angled after inputting.

Byleth’s male and female forms occupy the odd and even color variations respectively. The third, fourth, and fifth highly resembling Dimitri, Edelgard, and Claude- the leaders of the titular three houses. The six resembles Sothis. The 7th and 8th sport different colored hair to the default Byleths, due to events that occur in Fire Emblem: Three Houses.

The characters stage is Garreg Mach Monastery. The stage cycles through the market place, reception hall, bridge, and cathedral via a magical platform that hurls you high into the sky before crashing back down. The market place stalls can be broken, the reception hall chandeliers can come crashing down (though only some fighters can reach that high by jumping),

Much like some other DLC fighter stages, characters from that game can be seen in the background. For Garreg Mach Monastery these include Dimitri, Dedue, Ingrid, Edlegard, Dorothea, Petra, Claude, Hilda, Lorenz, Rhea, Seteth, and Flayn. Each appears in specific areas, partnered up with their house-mates.

As each stage now shares its music with others in it’s franchise, the new DLC brings 11 new Fire Emblem tracks, including a new arrangement of the main theme for Fire Emblem: Three Houses in English and Japanese.

A new spirit board will also be coming to the game, with Sothis as a Legendary spirit. Byleth’s classic mode is called “A Heroic Legacy”. While it shows off classic Fire Emblem stages, the final battle against Master Hand and Crazy Hand is hinted to have something “amusing” happen.

Sakurai also revealed his reasoning why so many Fire Emblem characters can use a counter-attack. It was in effort to reflect the turn based nature of those games. An enemy attack, followed by the player’s attack. He also revealed he played an early copy of Fire Emblem: Three Houses, in order to develop Byleth in time.

This now makes Byleth the final DLC character for Fighters Pass #1- along with Joker from Persona 5, Hero from the Dragon Quest series, Banjo & Kazooie from Banjo Kazooie, and Terry Bogard from the Fatal Fury and King of Fighters series. More DLC fighters were confirmed in September 2019.

Byleth will be available January 28th via Fighters Pass #1, and in Challenger Pack 5 for $5.99.