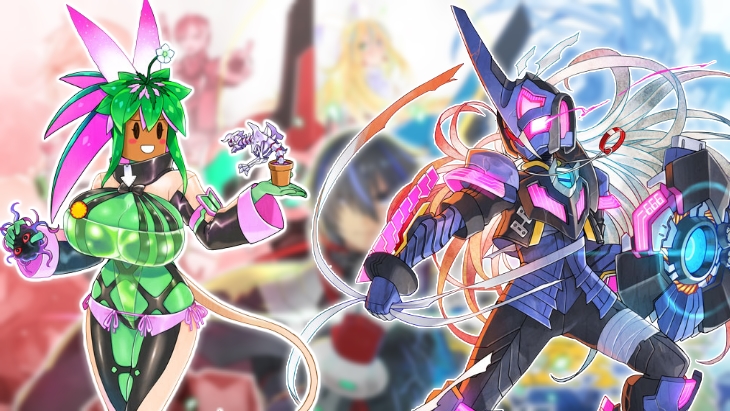 As previously reported, the Blaster Master Zero series combines side-scrolling exploration and top-down action genres. In Blaster Master Zero 3, Jason and Eve have finally reached planet Sophia- only to be attacked by the planet’s army upon landing.

Imprisoned and separated, Jason must now find his support droid, and still find a way to cure the mutant cells ravishing her body. Between them is Kane and Jennifer; the protagonists of the original Blaster Master in Japan, and now part of the Sophia Force.

The official website for the game also recently updated to reveal two more characters coming to the game; both returning from Blaster Master Zero 2. These are rival Metal Attacker pilots Leibniz, and top-heavy plant girl Kanna.

You can find the rundown on them both below, along with images via 4Gamer. Demon on the Sidelines
Leibniz

“I really couldn’t care less who breaks you. I just wanna be there to see the spectacle when it goes down.”

He is the pilot of Metal Attacker “GARUDA.”
Leibniz was bested by the mutants during his own battle against them, and as a result his home planet was destroyed and his partner was lost forever. Ever since his first encounter with Jason and Eve, he treated them as enemies, relentlessly pursuing and attacking them.
After the events in Area Ω, his mind began to change, and he went so far as to defend the Earth from another mutant assault. However, he appears to regret this decision, telling Jason that “If I knew it would end up that way, I never would have gone.” She is the pilot of the Metal Attacker “Eir.”
Kanna lives alongside her support droid, Kenwood, in the hyper-strange environment of planet Stranga.
It’s like, totally bonkers, but Kanna appears in this game for some reason.

The Pinnacle of Mutant Blasting Action Is Here!

In Blaster Master Zero 3, it’s time to hop aboard the all-terrain battle tank G-SOPHIA SV and explore the world around you in sideview mode, then travel into the depths of numerous dungeons on foot in top-down mode as the series protagonist Jason! With a host of new abilities and weapons in your arsenal, Blaster Master Zero 3’s hybrid of side-scrolling and top-down action is more intense than ever before!

Blaster Master Zero 3 brings Jason back to where the series all began, the planet Sophia, in order to save series heroine Eve in this final installment of the BMZ trilogy.

– The finale of the “Jason Saga” is here!

From the depths of planet Earth, to outer space, and now beyond dimensional rifts, this charming intergalactic story comes to its epic conclusion!

– “Reverse” the situation with the VRV system to forge a new path forward!

Jason now has the power to cross over dimensions!
With the new “VRV system,” venture into super-dimensional space and conquer tricky areas using the power of “reversal” as your guide.